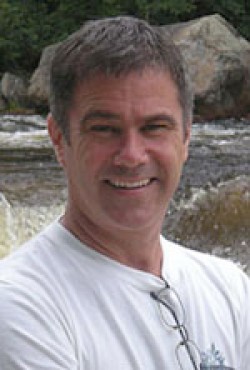 Professor of Graphic Design, Coordinator of the Art Program

Professor Favret earned a BA from Bridgewater State College and an MFA from East Texas State University. He also attended Rhode Island School of Design and earned a Certificate in Computer Graphics. Upon graduating from RISD he began working as a graphic designer at Rastergraph in Jewett City, Connecticut. He later worked at Chambers Engraving and Midagraphics specializing in color separation.

While working as a graphic designer he began teaching in the computer graphics CE Program at RISD. In 1999 he accepted a full-time teaching position at Housatonic Community College, where he is currently the Art Program Coordinator. Professor Favret teaches a variety of graphic design and studio art courses.

Mr. Favret currently lives in Uncasville, Connecticut, where he has an art studio and continues to paint. He has exhibited in galleries in San Francisco, Dallas, Boston, New York, and New Haven. He also exhibits in national, regional, and local exhibitions.

Visit our virtual faculty gallery to view artwork by John Favret and other HCC faculty.